The moment comedy fans have long been waiting for has finally arrived: late-night sketch series Saturday Night Live returned for its 46th season on October 3, jumping right into the political news of the times with a cold open sketch about the first presidential debate, which took place on September 29.

“We thought it was important to see it again since it might be the only presidential debate,” the narrator said at the start of the sketch.

After rotating guest stars portrayed former vice president and current democratic presidential hopeful Joe Biden in Season 45, Jim Carrey slipped into the white wig for this premiere sketch, and for the season going forward. He was joined by Alec Baldwin as President Donald Trump, and Beck Bennett, who played Fox News’ Chris Wallace, who moderated.

Maya Rudolph also popped in, reprising her Emmy-winning role of Senator and vice-presidential hopeful Kamala Harris, and Harry Styles made a cameo when Carrey’s Biden needed to take a break to listen to a meditation tape. (Styles appeared in a thought bubble, reading a calming, meditative story.)

Carrey’s Biden walked out on the debate stage in dark-tinted aviator sunglasses, mugging for the crowd by adjusting his tie and offering finger guns. He also pulled out a tape measure to check the distance between the podiums and pull his back a few inches as needed. Although the real-life Trump did not reportedly test positive for COVID-19 until Wednesday, hindsight allowed the series to work some commentary about the virus into this sketch.

“Absolutely, scout’s honour,” he replied, holding up two fingers that were, of course, crossed.

When asked if he was ready to debate, Carrey’s Biden said “absolutely not” but he did have “the beginnings of 46 fantastic ideas I may or may not have access to.”

The debate began with the topic of the Supreme Court, with Baldwin’s Trump starting things off by instead just listing complaints, such as, “People are mean to me. Joe here is very mean; Chris Wallace is mean; the economy is mean — it keeps losing jobs, which is mean, to me. And the China virus has been very mean to me in being a hoax. And that statement will probably come back to haunt me later this week.”

When it was Carrey’s Biden’s turn to answer the same question, Baldwin’s Trump interrupted him immediately, to which Carrey’s Biden responded, “No, don’t let your inner Whitey Bulger come out. Just flash them all that smile the taught you in anger management.” 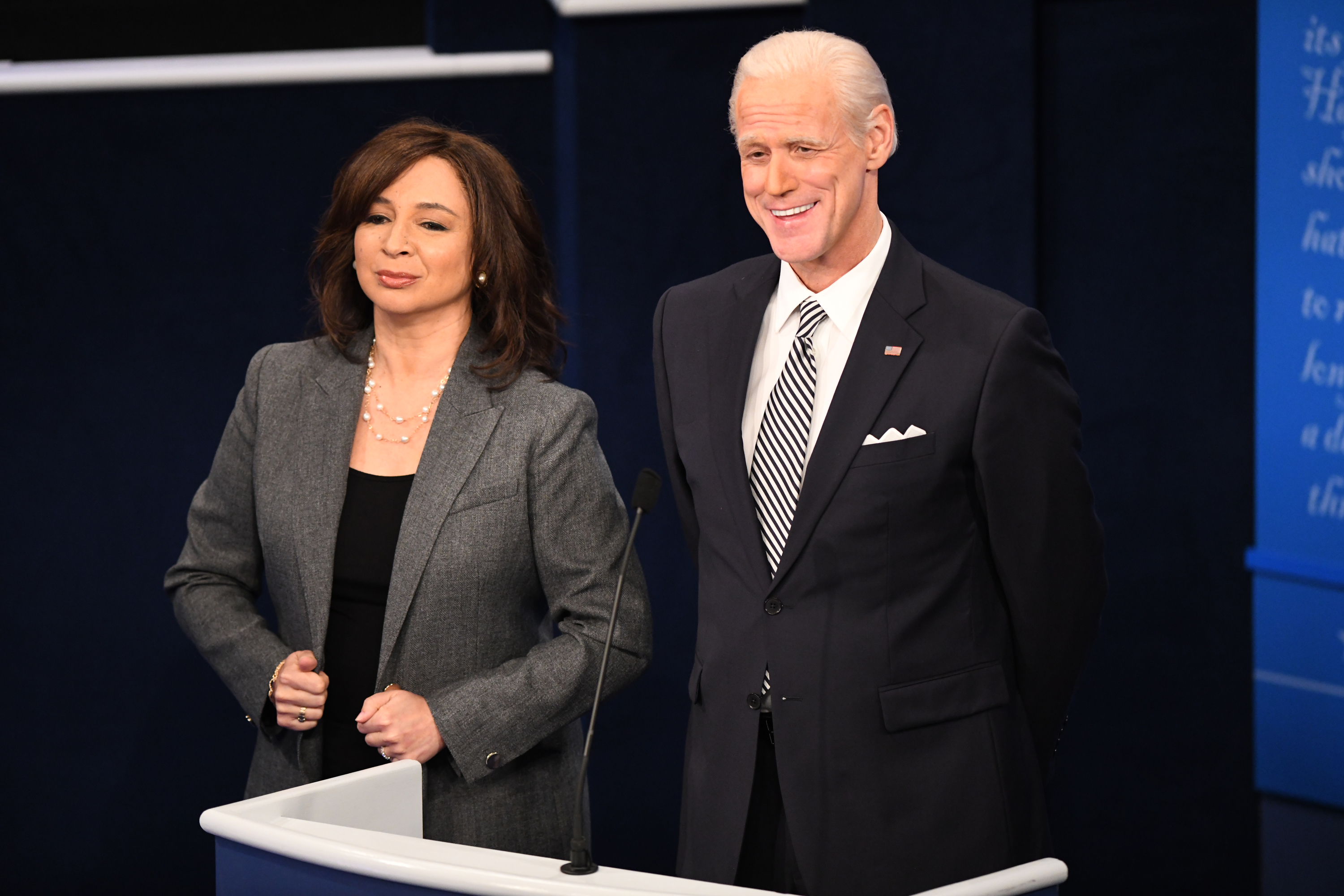 On the topic of Trump’s taxes, Baldwin said, “The terms ‘law’ and ‘order’ are very vague terms, and rules are meant to be broken. It’s the same with masks. I’ve got mine right here in my pocket.” (He then pulled out a thong.) “You don’t need one all the time. It’s like a seatbelt: You just wear it when you’re backing out of the driveway and then you can take it off.”

Baldwin’s Trump also commented on how Biden is always wearing “the biggest mask” and standing 200 feet away from people.

“I’ll rip that thing off your head and burn it and bury it in the pet cemetery where it came from,” Carrey’s Biden responded, referring to Trump’s hair.

Throughout the sketch, Carrey’s Biden also gave himself little pep talks to keep him from losing his cool, including to “just stand here and look lucid.” And of course, the topic of white supremacy came up just under the wire for the TK-minute long sketch. Baldwin’s Trump listed a number of groups, including the Proud Boys and White Eagles and said “I wouldn’t even know how to signal them if I tried” as he delivered a white power symbol.

Rudolph’s Harris showed up after Baldwin’s Trump started using a laser pointer on Carrey’s Biden (which he claimed it was “a wand that cures the COVID.”) Rather than her “fun aunt” aka “funt” persona, this time she was “Mamala” of the group, telling Baldwin’s Trump “my Joe” is a “nice boy” and needed an apology.

She actually got him to apologise and then said, “I think if there’s one thing we learned tonight, it’s that America needs a WAP: woman as president. But for now, I’ll settle for HVPIC: hot vice president in charge.”

READ MORE: SNL kicks off with Tom Hanks as host and sketches from home amid the coronavirus

The end of the sketch came back around on COVID, though. Carrey’s Biden literally took out a television remote and paused Baldwin’s Trump mid-word in order to talk directly to the American people.

“I think we all needed a break. Isn’t that satisfying? Just not to hear his voice for a single goddamned second. Let’s wallow in it. Let’s bask in the Trump-lessness,” he said. “America, look at me. Look directly into my eyeballs. You can trust me because I believe in science and karma. Now just imagine if science and karma could some team up to send us all a message about how dangerous this virus can be.”

He looked directly at Baldwin’s Trump, who was still frozen in his pose. “I’m not saying I want it to happen. Just imagine it did. So this November, please get on the Biden train, which is literally a commuter train to Delaware. And we can all make America not actively on fire again.” 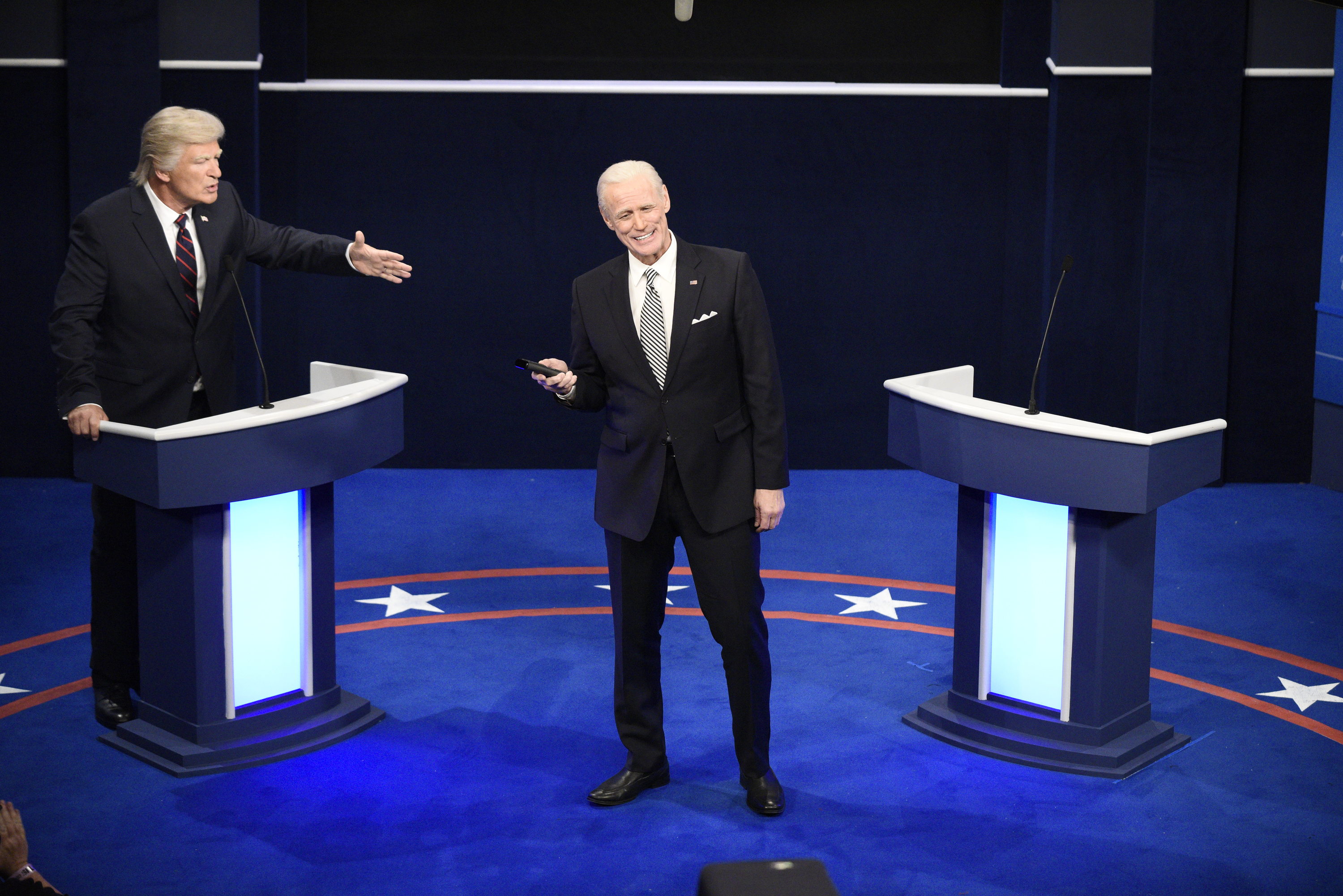 Later in the episode, Colin Jost and Michael Che sat back behind the Weekend Update desk again, kicking off the segment by admitting how hard it was to process the news of Trump’s COVID diagnosis right before they were scheduled to return to air after four months of hiatus. Che noted that there may not be anything funny about the situation from a moral standpoint, but mathematically in joke construction, “this is all the ingredients you need.”

“It’s a bad sign for America that when Trump says that he tested positive for a virus, 60% of people were like, ‘Prove it,'” Jost said. “It’s been very weird to see all of these people who clearly hate Trump come out and say, ‘We wish him well.’ I think a lot of them are just guilty that their first wish came true.”

Sun Oct 4 , 2020
Us Weekly has affiliate partnerships so we may receive compensation for some links to products and services. We love to wear skirts all year long, but it’s essential to adjust the style to fit the season. In the fall, it’s all about the midi-length skirt — which is exactly what […]